"...echoes of rock, blues, soul and country greats reverberate throughout Solomon King's extensive repertoire and he's as likely to introduce a packed club to a long lost Hank Williams gem as he is one of his sigature contemporary originals. Unpredictable but never afraid to shake things up..." Rock Wired Magazine

Songwriter/musician Solomon King, who notes that celebrated Roy Orbison became known as the “King of Hearts,” also praises the legend’s first-person narratives in his songs. Always upbeat King, a former Grammy “entrant” nominee in contemporary blues, observes: “Roy would create this persona of a suffering male character who experiences very poignant emotions about isolation, loneliness and pain, and then the tears come. He would emote and sing on such an intense level, a level that was not the norm for men of his time, in the early 1960s.”

Indeed, it was like, there’s no crying in rock and roll. Well, until the King of Hearts turned up.

So, it’s not surprising that Solomon King has chosen Orbison’s “Crying” as one of the videos he’s doing of classic covers. But King, who has also starred in a feature movie about Phil Spector (“The Phil Spector Incident”) needed to get into character to perform “Crying.” So, he and his director (Jay Morran), went to a LensCrafters store to find Roy’s signature shades.

King recalls: “I showed her a photo of Roy in his classic dark shades, asking, ‘Do you have these?’ She replied, ‘Sure, Wayfarers.’ I then asked, ‘Do you know who this is?’ This young person said, ‘No.’ Fine, I added, ‘Well, I’m a musician, and I need this look.’ She instantly asked, ‘For what, upload to social media?’ She didn’t ask whether it was for a record cover, or a gig or tour, or a radio interview—all the things one needs to get to, well, The Grammys.”

King, who is compiling some cool videos of classic songs from the 60s and 70s for short term exposure to a new generation, continues:

“Anyway, I found it noteworthy that in this world where millions hang on every image or word from the Kardashians or Taylor Swift on their Instagram pages, this Gen Z salesperson immediately thought of social media, And, she also didn’t know who Roy Orbison was. I mean, he’s the man dressed stylishly all in black, with jet black hair, holding a black guitar and wearing those signature dark shades. And he appeared more like a shadow than your normal 60s or 70s rocker. And, consequently, he was the man who inspired singers to be different and to find their own inner voice. He’s been an inspiration for everyone from me, Solomon King, to Bruce Springsteen who once observed, ‘Everyone knows no one sings like Roy Orbison.’”

Certainly, not everyone like the salesperson, knows Orbison’s music. And, that’s the reason, Solomon King bought those stylish Wavfarers, got into character and shot the video of him covering Orbison. He adds, “For me it’s about discovery. My concept with doing these quick hit, fun videos of cover tunes for short term exposure is to bring them to a new generation. And if they see my cover on social media, maybe they’d also see the original Roy Orbison and say, ‘Hey, let me listen to the legend’s original song.’ It could be like discovering Mozart for the first time. An exciting discovery process.”

And, while Solomon King gets ready to master his new record of original songs, he has plans to maybe take the classics of 60s and 70s on the road to Casinos and other venues which are looking to re-open.

There are those that simply play the blues and some people that have lived them and there are dudes lke SOLOMON KING who have done both. Hailing formthe Detroit, KING's days a s an auto worker read like something out of a CHARLES BUKOWSKI novel complete with booze and broads but when the layoffs came he headed west with an acoustic guitar in hand and began a career in the very music that celebrates hard living, drinking and women that know how to take your mind off of things only to land you nin more trouble.  Following up his previous releases UNDER THE SUN and MEDICINE  is the album TRAIN  -  a raw collection of blues rock tunes that walk the line between love and lust and  celebrate getting on with life. Just take a listen to tracks such as the BO-DIDLEY-inspired BABY DOES ME GOOD, the gut bucket title track and COFFEE SONG.

Echoing Springsteen’s clarion call — “We’re all prisoners of rock and roll, and we’ve been sentenced to life” — Blues Rocker Solomon King Heads Back onto the Road

For about one minute, renowned singer/songwriter Solomon King was recently wondering if he should hang up the blues-rock and segue into something else. King had assumed his present stage persona about ten years ago, saying goodbye to his Jeff Laine solo career, and embarking on a musical journey that earned his debut blues album, “Under the Sun,” some Grammy heat. Traveling across America and to Hawaii and then Australia, Solomon King & The Chosen played and recorded with a host of the finest blues players in the business.

In the process, he released several records including “Under The Sun. Medicine,” “Train,” “Against the Current” — covering a variety of sounds from blues-rock to Americana, country and hard rock.

However King was going through what all us artists undergo, asking, What next? But two recent performances have reinvigorated him, and he’s admitting, like Springsteen, he’s a prisoner of making music that impacts people, that makes you dance, sing, smile and make love.

First, he did a solo performance at an Indie Collaborative event at the Phoenix Theater in San Francisco. He played just one song, digging deep into his extensive music catalog to bring up “All the Way Down” and he stunned his musical and artistic peers into silence before they broke out in applause. He recalls:

“I chose it because it’s a really evocative song that would affect the audience. It was written when I was a street singer on the Venice Boardwalk, working for tips, and it was about the lowest point in my life after being dropped by a major label, and after the ‘devil’ called Johnny, who I perhaps mistakenly chose not to meet, did his thing. But I played this song again for the Indie Collaborative and both myself and the song seemed to take on a new life — just like the mythical Phoenix, the name of the venue.”

“I went down to the Boardwalk with my suitcase open/With the jugglers and the acrobats/I heard the words of Jesus Christ spoken/A girl in a leopard skin leotard gypsy tattooed on her arm/Looks at me long and hard. she said, ‘I’m the one who owns this town, the sun the sea and the ground/Who are you to be here hanging around?/This ain’t no underground, this is all the way down.” — Lyrics to All The Way Down by Solomon King

The second life-changing performance was at Maui Sugar Mill in Tarzana, where live music acts regularly bring the house down. But Solomon King, wondering if this might be the last go-around, pulled out all the stops, kicking off his rapturous set with a foot-stomping version of “Jack Me Up.” His guitar playing was venomous. He bared his soul and sang from the heart. And, his band, The Chosen, were extra tight.

New fans said his band just “nailed it,” that he was “engaging” and just “reached out grabbed us.” And, afterwards, another fan observantly noted:

“You may never make it huge or have all the acclaim that performers seek. But it’s not just about that, man. It’s about you absolutely crushing it from our viewpoint. So, it’s not what you get out of it, but it’s about us, the audience, how we responded, how it impacted us. What you gave us is what’s important. We need what you do.”

The excited response and that eye-opening comment has inspired King who now looks forward to booking more gigs and getting back out on the road, explaining:

“I’m feeling the call to continue doing this and it’s not about what I get out of it. Even though if we’re honest, we all want acclaim and the feeling of being loved in the moment is great. Those two performances reminded me that music is about the audience, it’s really about them. That’s why Springsteen connects, he realizes we’re in this music together. For me, I’ve just started giving it everything I have. And if I die here right now, well, it’s the best I have to offer and I’m going for it now. So, I’m heading back on the road to bring heartfelt, vulnerable but powerful music to audiences out there. Because as Bruce Springsteen suggested, we’re all in this together, prisoners to music for life.”

Up next, Solomon King & The Chosen (featuring Bobby Carradine), will perform “All the Way Down,” an acoustic set on October 5 at Lethal Amounts Gallery in Los Angeles. The evening will see the launch of Justice Howard’s “Voodoo” — a gloriously illustrated book by world-renowned photographer Justice Howard with writings by Voodoo Queen, Bloody Mary. This splendid book offers to “peer behind the curtain and journey into Voodoo’s hidden world.” 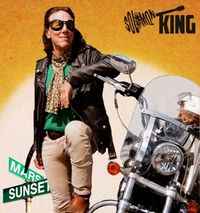 Solomon to the Max Tour

"Solomon to the Max Tour"